The City of Watauga releases Mosquito Fish, (Gambusia affinis) at certain locations within our city’s drainage channels that hold pockets of water. These native Texas minnows are known to eat large numbers of mosquito larva. This plan is in conjunction with the Tarrant County Public Health Department. We are also working with the TCHD by collecting mosquitos from our mosquito trap and transporting the mosquitos to the TCHD for testing for the West Nile virus.

The City of Watauga also maintains all of our earthen drainage channels by mowing and trimming (during the growing season) every month, on a regular schedule. We also pick up debris in our channels on a regular basis. This monthly cleaning and mowing reduces the habitats that mosquito’s may use for breeding.

The City of Watauga also utilizes Mosquito Dunks that are tossed into contained water sources (that may breed mosquito’s), to kill mosquito larva.

The City of Watauga also utilizes the street sweeper to remove locations of standing water in the street during mosquito season.

If we find positive tests for west nile or zika virus two weeks in a row, we spray the area of concern.  If Tarrant County informs us of a human case of either, we spray that area.  Due to privacy issues, we are not given or allowed to share locations of actual human cases (we only know the area to spray).

These control efforts that the City of Watauga has conducted will help reduce the mosquito population thus reducing the chance of someone contracting the West Nile or Zika Virus. The city will continue to implement these safe guards for the protection of our citizens. 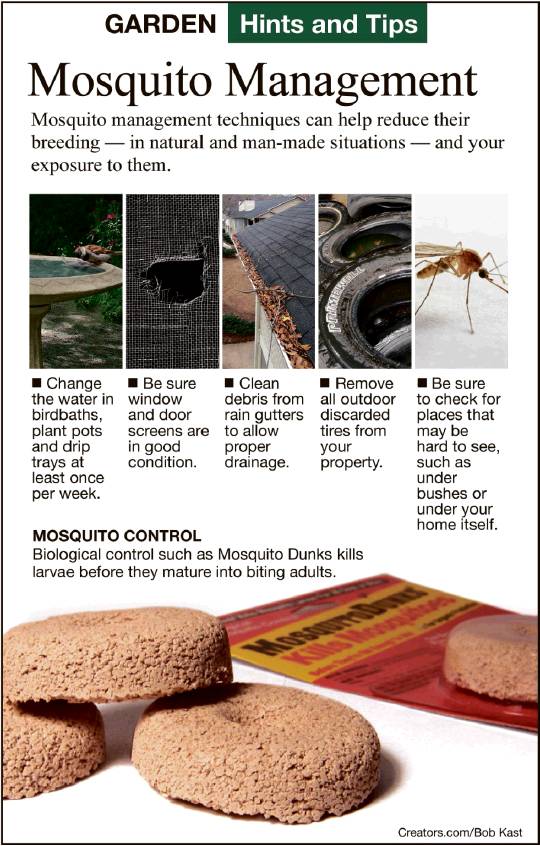 Many areas have continued to experience heavy rains recently, and a number of places are still flooded from previous storms. This will lead to the next natural phenomenon: mosquitoes. Of course, mosquitoes occur every summer, but there are some things you can do about them.

There are about 200 species of mosquitoes in North America. The biggest problem is not that they are annoying, but they can transmit many deadly, viral diseases and parasites to people, pets and livestock. Great strides have been made to reduce some diseases such as malaria. Other ones like the West Nile virus have moved from Africa to the United States. Mosquitoes also transmit several varieties of encephalitis and the nematode that causes heartworms in dogs.

Container-breeding mosquitoes lay their eggs in stagnant water. Anything that will hold water for more than a week can produce mosquitoes. Eggs are laid on or near the water surface and hatch within a few days. A couple hundred of them together look like a quarter-inch speck of dust floating on the water.

The adults hatch from a pupa stage that lasts one to four days, and they live for a week or two. The male mosquito drinks nectar from flowers and does not bother people. The female must drink some blood before she can produce any eggs. Some species prefer mammals while some prefer birds, but they will take what comes their way. Most species prefer feeding in low light levels, such as at night, during the late evening or early morning, or in the shade.

Controlling mosquitoes needs to begin with making sure they do not hatch. Do you or your neighbors have any of the following potential mosquito nurseries? These can include old tires; buckets; a swimming pool (even a tiny one); rain gutters; a flat roof; leaking faucets; an air conditioner unit puddle; a birdbath; a fountain; a pond with no fish; puddles; tree holes; a low area flooded by sump pump water or a septic tank; animal water bowls; irrigation water that puddles; flowerpots with saucers; or any other thing left outside that collects water.

The easy way to fix the problem is to drain every one of these locations at least weekly. Any puddle that lasts for more than four days could produce mosquitoes.

In locations that cannot be drained, the best way to kill mosquitoes is at the larval stage. A safe, nontoxic way to control mosquitoes is to use a product containing a biological larvicide called Bti (Bacillus thuringiensis subspecies israelensis). There are several brands that use Bti, and some of them have a slow-release method of dispersal. Mosquito Dunks by Summit Chemical Co. have been around the longest, and I have found these work very well. They look like small, compressed, sawdust doughnuts that float on water and kill mosquito larvae before they become flying, biting, disease-spreading adults.

The bacteria are ingested by the larvae as they feed, and the larvae then get sick and die. The bacteria do not affect fish, mammals, birds or bees. Some other varieties of Bt do affect caterpillars, moths and butterflies.

Treating at the larval stage is the most effective way to control mosquitoes. Adult insecticide sprays may look good to the onlooker but are not as effective at controlling mosquitoes.

COPYRIGHT 2019 JEFF RUGG DISTRIBUTED BY CREATORS SYNDICATE - Release of Copyright for Use by City of Watauga - June 27, 2019 by Jeff Rugg